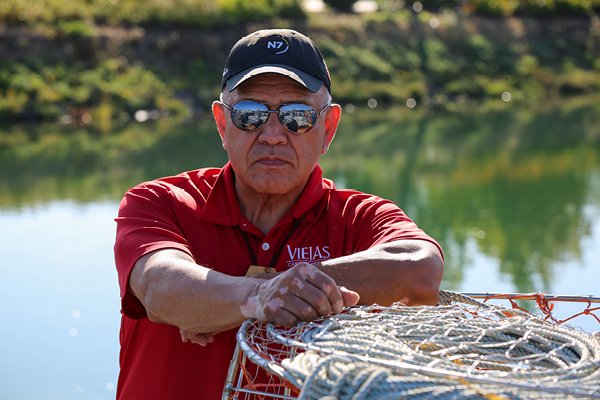 When the Lummi community of the Pacific Northwest heard about Afghan refugees coming into the United States, they quickly mobilized to provide housing and support. “We wanted to welcome them to our Homeland,” says Darrell Hillaire, former Chairman of the Lummi Nation. “We’ve been doing immigration since 1492, and we didn’t want to leave anybody out,” he chuckles.

Darrell may joke around, but he is serious about spreading indigenous knowledge. Doing so is a family tradition; around the year 1900, his great grandfather formed a song and dance group called Children of the Setting Sun, to educate newcomers to the Puget Sound region about the land and its original inhabitants. When it came time for Darrell—a playwright and film buff—to pick up the mantle, he evolved the group’s storytelling practice to include stage productions and short films.

Today, Children of the Setting Sun Productions is, at first glance, a full-fledged multi-media arts organization specializing in Coast Salish storytelling. But it’s also an endeavor that defies categorization. Hillaire’s aim is to convince others to look to indigenous expertise and knowledge to address today’s most pressing problems. “I read an article in the Washington Post, and they made it sound so profound that tribes are taking care of the environment. But we always have. In bringing our stories out, we recognized that they fit within the whole conversation of needed change for our country and for our world.”

The light bulb came on when CSSP performed Hillaire’s original play, Sixkiller Buys the Washington Redskins, at Roosevelt High School in 2015. “It ended up being a great healing for people that had a misunderstanding of racial relations,” says Hillaire. “We realized that a values change is needed in this country, and that our people need to embrace a leadership role in that change.”

Setting Sun’s current flagship initiative, Salmon People, is the perfect embodiment of that vision. (Seriously, you need to watch the 5-minute Salmon People teaser video, which is not only beautifully produced but also moved our staff to tears.) Setting Sun’s Co-Director Natasha Frey says the initiative is bringing together the many tribes that live along the waterways that are home to Northwest salmon “to amplify the culture, values, and leadership of indigenous people in regard to climate change, using salmon as the ‘canary in the coal mine.’” Beyond convening multi-tribe gatherings to share in healing and knowledge, the Salmon People project will include a 90-minute documentary and a six-part video series, as well as an extensive research component aimed at impacting government policies and developing academic curriculum.

Hillaire was inspired to develop the project after witnessing the record-setting Sockeye Salmon return to Puget Sound in 2010. “Something like 34 million Sockeye returned to the Fraser River and came through the Homeland of the Lummi people. There was this real, palpable feeling of not just optimism or realization of wealth, but gratitude and generosity through our whole community. It was electric. When the salmon returned, it meant that we could really fulfill who we are as a people.”

Unfortunately, Sockeye and other salmon runs have only declined since then, and sharply. “Like this year, 2021,” Hillaire says, “our Lummi people didn’t get one day of fishing. And last year, the same thing, there was no fishing. You can feel the soul of our people when there’s no salmon; it’s quite empty. Our stories are becoming about what we used to be rather than who we are.”

Hillaire started shooting B-rolls of salmon returns and filming interviews with old-time Lummi fisherman Larry Kinley. “We wanted to know, what does it mean to have Salmon living inside of you—the spirit of who you are as Salmon People?” He noticed that other tribes were struggling with the same sense of loss of identity, which is tied inextricably to salmon. “The Yurok tribe in Northern California, the Nez Perce, and the Yakima, all along the waterways and headwaters,” says Hillaire, cultures developed around salmon. The creation story of the Nez Perce, for example, includes Salmon offering to sacrifice himself to provide sustenance for the Nez Perce people. Across tribes, Salmon as well as other animals are considered not just people in their own right, but also relatives, family to human beings. “We realized that all these tribes take the responsibility to protect the salmon. It’s their number one—I wouldn’t even call it a priority. It’s who they are. They were born to do this.” 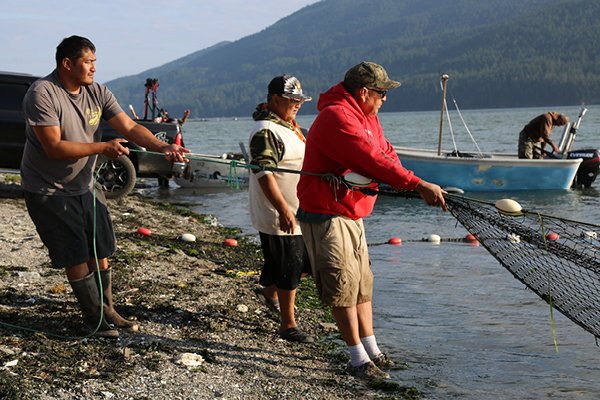 An Infusion of Spirit

This approach goes much deeper than what mainstream society thinks of as “environmental stewardship.” It is a fundamental shift in our relationship to nature, one that is, at its essence, spiritual. “It’s a matter of how we change people rather than processes or lifestyles,” says Hillaire. “It’s the introduction of spirit into the work where I think we can play a vital role, because we’re spirit people before we’re human people.”

Putting these ideas into a grant proposal poses some challenges, says Hillaire. “Unfortunately, in the funding world, we get categorized as being an arts program or solely a storytelling organization on indigenous life, or maybe we can make a case for funding for taking a stand against climate change. But I think our job is to celebrate and share our spirit with other people, so we can have a better chance of saving the planet and actually saving ourselves.

“We have a whole network of leaders that have joined our work. We need to create unity of purpose and synthesize what they’re doing on different reservations into one voice. That’s where Children of the Setting Sun could really play a vital role, to keep them all connected. They feed each other.”

The Technology of Gratitude

Hillaire explains that Lummi culture is steeped in gratitude, far deeper than the platitude that it is better to give than to receive. “The only purpose of accumulating wealth is to give it away. That’s what the Cedar tree does. That’s what the Salmon does. That’s what the River does. They give themselves to us so that we receive them as a people. They give and give to us, and we need to understand that so we can give back. Simply put, those kinds of things seem kind of trivial, but they’re really hard to do. It’s very contrary to an industrial mindset.”

And yet, Coast Salish people have been practicing what one might call “the technology of gratitude” for generations, through ritual. Setting Sun learned through convenings and interviews that First Salmon ceremonies are prevalent throughout the many coastal tribes. “I went down to the Columbia River, and I visited the Celilo longhouse there and met the chief. Lummi has a First Salmon Ceremony in May, to welcome and give thanks for when our relative Salmon comes home. And the chief says, ‘Well, we do that, too.’ They have 45 villages on the Columbia River. And the ceremonies start at the mouth of the river. The first village has a First Salmon ceremony, and when they complete that ceremony, that village can go fishing. And they go to the next village, and when they get done giving thanks, they can go fishing. They do that all the way up the Columbia River. They give thanks. Only after they give thanks do they allow themselves to go harvest. And I thought, well, if that’s going on all up and down the Pacific Coast, why can’t we teach that to the rest of the country?”

Hillaire says that giving thanks is “fundamental; it’s probably the most important thing we do as a people. In it, there are a lot of things: there’s forgiveness, there’s an understanding at the very core of who we are as a people, there’s putting the accumulation of wealth behind gratitude. It changes your purpose. If we all practiced that spiritual gratitude at the beginning of our relationship building, I think we’d be better people because of it.” 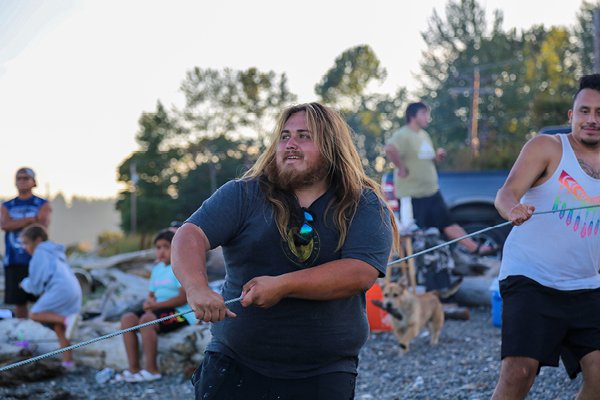 Hillaire is also careful to point out that this shift in thinking is additive; it is not meant to replace science or the important work that other people are doing across the environmental movement. “There are several organizations doing incredible work on behalf of salmon and the environment. We are grateful for and will be partnering with many of them. What is truly unique about the Salmon People Project is the introduction of spirit and ‘boots in the water’ storytelling. This distinguishes our work, and we believe it will help activate more people to get involved and make a difference.”

Frey agrees. “The science of climate change is already there. It’s proven. What’s unique about Children of the Setting Sun is that we are bringing the spirit. You marry those together, science and spirit, and that’s a powerful force.” She points out that when Setting Sun convened the Salmon People tribes on Indigenous People’s Day this past fall, they also livestreamed the gathering on the web, and the response was quite diverse. “The depth of organizations that were participating and sharing was tremendous. So many environmental organizations, of course, but also social justice organizations, arts, human rights. It was perfectly showing the intersection of all that we do.”

Beyond the Salmon People Project, Children of the Setting Sun is also diversifying its work to better navigate that intersection. “We have four departments in our organization – storytelling, youth development, community work, and the Setting Sun Institute,” says Hillaire. “The Institute will have a ‘think tank’ structure so we will be able to quantify what we’re doing in a way that will be helpful to other organizations and people doing this work, whether it’s taking down dams, influencing policy, or

stopping destructive oil pipelines and fish farms. We can stand with them and help them with what they’re doing. We can add to their work. With the things that are going on in this country, we can bring a healthier and more holistic voice to what needs to be said and done in this world.”

The Role of Trust-Based Philanthropy in Innovation

Since early 2016, the Satterberg Foundation’s grantmaking program has increasingly centered around the concept of Trust-Based Philanthropy, which aims to put Grantees on a more even footing with Grantmakers. We do this through multi-year, general operational funding, valuing our partners’ lived experiences and expertise, and building authentic relationships in lieu of “reporting.” “The way that Satterberg gives us these resources is a breath of fresh air,” says Hillaire. “Number one, you’re not having to do a lot of busy work to have a relationship. It’s really just about a very personal connection, and that kind of sets the stage for everything. It’s so contrary to Lummi culture to ask for something. It’s natural for us to give. I view Megan and Pete [from Satterberg] as family first, rather than a foundation, because at the very outset of our relationship, I invited them over to our Lummi Stommish Days. And they showed up and they brought their families. It was my family and their family eating salmon and oysters and watching canoe races on the beach.”

Hillaire also explains that beyond financial resources, relationships have been key to Setting Sun’s transformational growth and freedom to innovate. “Satterberg’s funding was an initiation into this bigger world, and it continues to grow on a very human level. We have a lot of work to do up and down the coast. It has made it more meaningful to know how they live their lives rather than how they make decisions as a board. We feel we are doing this work together; it is so much more powerful than just having to look up to them and they have to look down on us. That’s so corporate and old school. I am glad that they are encouraging others to follow this model.”

Are you a funder?

Join us in our trust-based approach to philanthropy!

< Back to What’s Happening