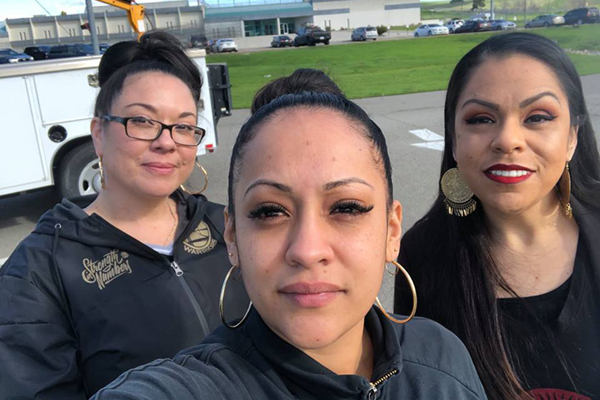 From Formerly Incarcerated to Forever Empowered

When Jessica Nowlan first came to Young Women’s Freedom Center, she was seventeen years old. “I was living and working on the streets. I’d been incarcerated so many times, and I heard about this organization that hired girls like me.” So she applied. Thinking YWFC was like most employers, Jessica lied about her history of incarceration, job experience, and living situation. “I said all the things I thought you were supposed to say to get a job. I didn’t get a job.” Shortly thereafter, she went back to juvenile hall, where a worker told Jessica that, when she got out, she should reapply and be honest. “The Center hired me as a Community Health Outreach worker,” she recalls. “Being a part of the organization transformed my life.”

Twenty years later, Jessica is now YWFC’s Executive Director. It was not a straight path. At some point, she left the Center and worked at a variety of other non-profits. “But I always was like, ‘What the fuck are these people doing?’ I got fired from the DV [domestic violence] shelter because they had, I swear, like 800 square feet of new baby clothes and diapers and supplies. But they’d only let me give out one diaper [to each parent]. So I’d bring the women in and say, ‘go shopping.’ Every experience I had after the Center, I ended up back on the streets and homeless. But there was something so special about [YWFC] that allowed me to bring my full self.”

In a country where formerly incarcerated people are unemployed at nearly twice the rate as the rest of the population, Jessica is the living embodiment of YWFC’s work, which is to empower young people most impacted by incarceration, misogyny, racism, and violence (namely cis and trans women, trans men, and gender-expansive people). 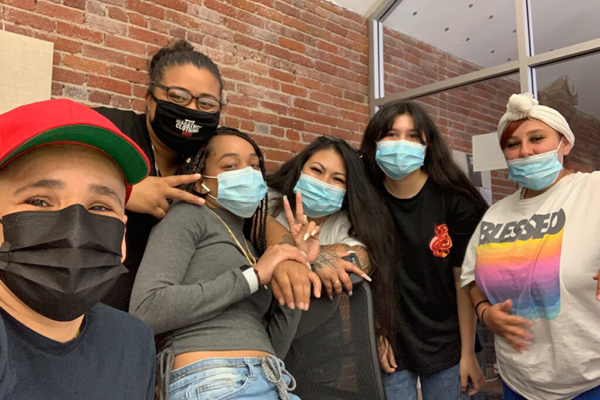 When Youth Have Agency

Jessica explains how transformative it was when YWFC paid her the same as any adult in her position, which was double the minimum wage. “And no one ever told me to stop selling drugs or stop doing sex work, or to stop doing any of the things I was doing. For the first time in my life, I had economic choice. I had agency.” She attended staff meetings and was treated “not as a youth participant, but as a team member. I’m in City Hall speaking. I’m seeing folks with positional power, folks doing healing work—and they are my peers. I was like, ‘You guys are going to therapy and not because of a court order from your probation officer? That’s cool. I want to be cool.’” At some point, it dawned on Jessica that “I had been hired for my expertise. It wasn’t a youth program. Seventeen- and eighteen-year-olds were building the organization.” 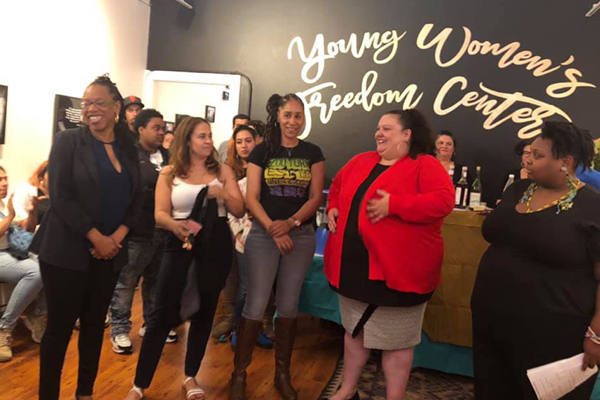 After running government programs, consulting, and launching a couple of businesses, Jessica joined the board of YWFC, but “the organization was in a pretty bad place. Don’t get me wrong—the Executive Director at the time, Marlene, was doing incredible work. Like me, she had come to YWFC as a formerly incarcerated teenager. She is like a sister to me. But after 18 years, she was ready for her next journey. And yet we didn’t have a plan as an organization for what to do without her! As a board, we tried to hire a new E.D. externally, which we learned just does not work for us. We went through three E.D.s in three years. And in all that upheaval, we didn’t raise a lot of money.”

The board voted to shut down the Center in six months, but Jessica could not bear to let that happen. “There are not many places in the country that are really focused on girls doing sex work, that are on the streets, incarcerated, in the welfare lines who are also saying, ‘Those are the leaders that we need. And what does it look like to pay them well and to invest in them?’ And so I was just like, ‘Fuck it. Please let me try.’” 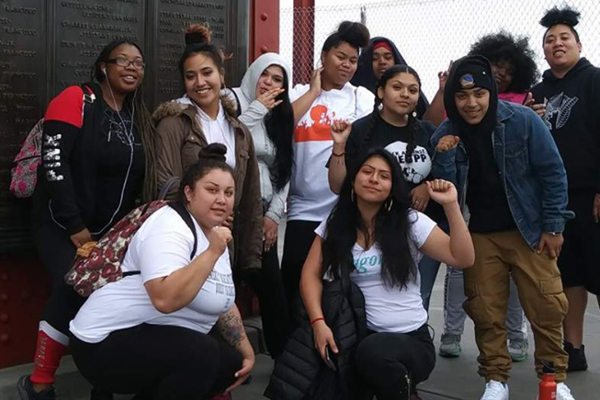 Five years later, YWFC’s success story sounds like an angel investor’s dream come true: It has grown from one location to six, with 14 chapters around the country. Under Jessica’s leadership, its annual budget grew from $500,000 to $6.6 million.

How did they do it? By keeping things simple, says Jessica. “The goal is not to scale the organization. We are focused on the idea of really believing in people to lead. It’s not so complicated. I came in with this community of other women who had come up through the Center, and we said, ‘Let’s cut everything that is not our work, things we’ve [only] done because of funding and government grants. And let’s get back to what we are good at: seeing each other, building safe community, and building personal and collective power.”

That clarity, Jessica says, not only transformed the Center’s work, but actually resulted in them returning some funding that didn’t align with who they are. “We had taken this [money], but no way are we going to say that we’re getting all the youth we work with into four-year universities. Who are we to tell them that? I dropped out of school in the 7th grade. I have a G.E.D. That’s dumb.

“First of all, our goal is never to save anyone.” Jessica points out that most of the young people who come to the Center are just at the beginning of understanding of who they are and how they fit into a world that was not built for them to succeed. They’ve been focused almost completely on survival. “And we’re up against structural racism and poverty and patriarchy. Yes, we do employment, we do internships, we do policy work and research. But our methodology is that we meet you where you’re at and build with you over time as you’re working to understand your life in the context of the world, and the world in the context of your life.” For many, the Center is not just the first time they’ve had a job, but the first time they are able “to dream, to think about what’s possible. It’s being able to move from ‘my’ experience to ‘our’ experience.” 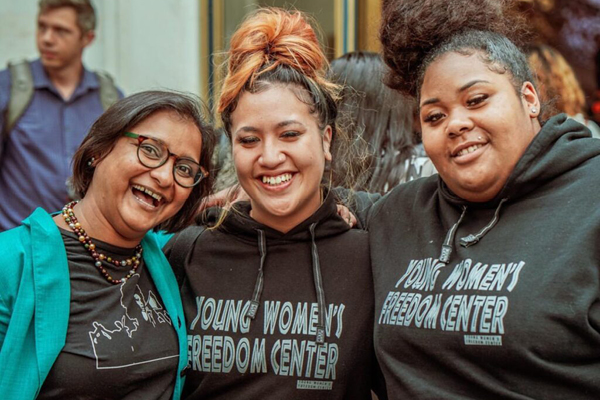 Seeing the bigger picture beyond one’s basic survival, Jessica says, “is a huge luxury,” a truth most social welfare programs do not seem to account for. “I didn’t go to college, but I took Sociology 101, and I remember learning about Maslow’s Hierarchy of Needs. Why isn’t it applied to mass incarceration, to reentry, to the young mom who is homeless but then gets arrested for not going to her court-ordered therapy? It’s just totally backwards.”

That’s what’s different about YWFC’s approach. “When folks have agency to make self-determined decisions about their lives,” says Jessica, “when they have space to bring their full selves—that is the long-term solution. If we want to imagine a different country, a different society, a different democracy, we 100 percent need new leaders. And we know there is untapped brilliance in our communities. We provide the on ramp for folks to have space in their lives to find their brilliance, to recognize it, and to share it.” Internally, the Center doesn’t even describe what they’re doing as “programs.” “We only use that word when we’re talking to funders, “Jessica says. “We have a methodology, and it’s all one thing. People progress through it, or not.” 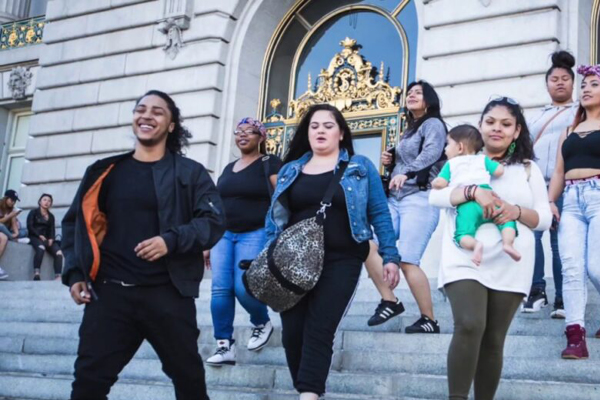 “I still struggle with articulating it, but, man, it’s not that fucking hard to understand,” continues Jessica. “We’re trying to fight this big, huge machine. I was just reading the first report in 1996, and one of the quotes I pulled out said, ‘Many of the girls who come to juvenile hall would be better served outside of the probation systems.’ We’ve been saying this, the young people have been saying this. We know that foster care and incarceration are racist and sexist and rip families and communities apart. We don’t need any more research. We need to resource communities and allow folks to step into the solutions and resilience and brilliance that’s already there. That’s what the Center does.” 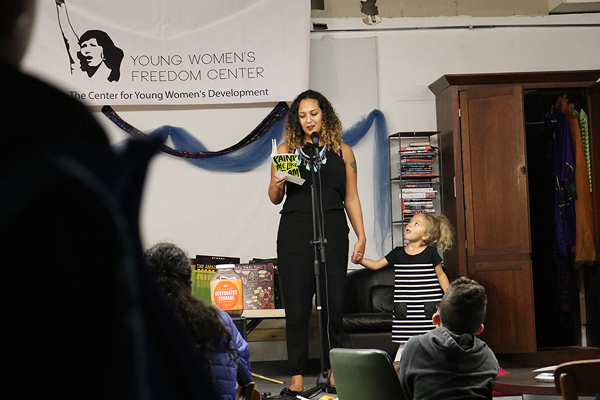 A Methodology of Power

The irony, of course, is that when not trying to scale, the Center has grown exponentially. By giving money back, they have raised more money. And when refusing to tell young people to stop doing things like sex work and drug dealing and living on the streets, they achieve those outcomes (that every funder says they want). Jessica says there actually is no contradiction, it’s just that funders tend to focus on all the wrong things, when they should be focused on the only thing that matters: power. “The last thing that folks in power want to do is give folks on the ground our power. But that’s what it’s all about. That’s resources, that’s access, that’s self-determination.” 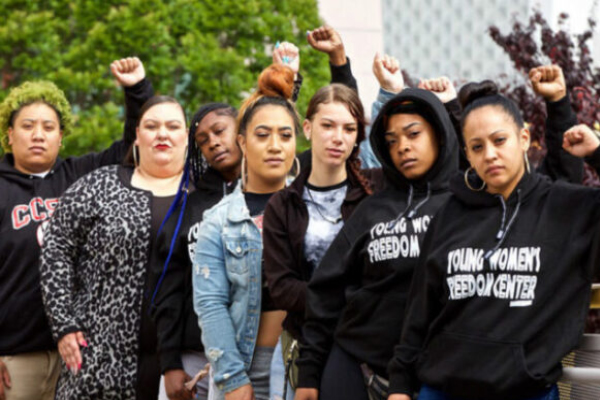 “Part of what’s allowed us to have such growth,” says Jessica, “is funders like Satterberg. Because there’s trust in the relationship, we are able to say, ‘Look, this is what we do, this is what we believe in. This is our expertise. And then they’re saying, ‘Ok, here are the resources to do your work.’ If we’re talking about transforming or abolition of the system, it’s the same thing, right? Let’s just give families what they need. Let’s not make people jump through hoops. Let’s trust people to have decision-making power over their own lives.”

The Center will undoubtedly continue to focus on putting power into the hands of those whom society has empowered the least. Jessica says that, across all the Center’s staff, “We have about three hundred years of time served [in detention]. We’re talking about young women, transgender, and gender-expansive folks who’ve grown up mostly in poverty, have experienced high levels of violence in their lives. They have been impacted by the war on drugs, incarceration and welfare, public housing, and they have navigated working in the underground street economy. That is the majority of our team.

“Our Policy Director right now, she’s a badass who I met at a reentry program. She had just done seven years. We were talking about policy, and I’m like, ‘Girl, you should be our Policy Director.’ And she’s like, ‘What? I don’t know. I don’t know how to do that.’ And she’s killing it. Most of our team, when they first came on, they could never see themselves as leaders and experts, but now they are actively getting recruited by other orgs. For me, that’s the main thing. That’s why I’m here. Just to see people’s sparks go off.”

Are you a funder?

Join us in our trust-based approach to philanthropy!

< Back to What’s Happening